Sketching at the Outdoors Inc. Canoe and Kayak Race

Join us to sketch on Saturday June 16 at the 31st Annual Outdoors Inc Canoe and Kayak Race!

Don't miss the fun!
Posted by Memphis Urban Sketchers at 11:10 AM No comments: 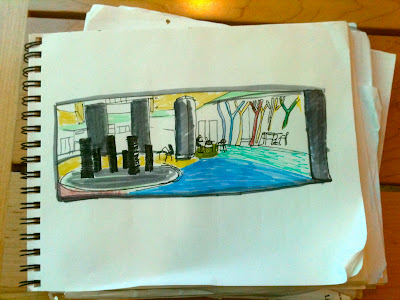 Saturday, June 2
Central Library - 3030 Poplar Avenue
10:00 AM
We'll meet just inside the entrance and sketch throughout the building. The forecast for Saturday is "mostly sunny and delightful," which gives us opportunities to sketch outside as well!

The Library has asked that we refrain from sketching library patrons and employees.

Hope to see you there!

Sketch by Chandler Pritchett
Posted by Memphis Urban Sketchers at 11:11 AM No comments: 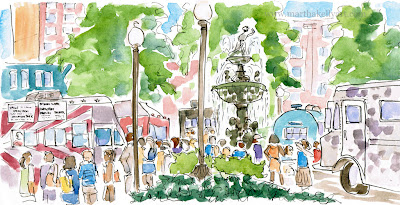 I've been spending some time sketching downtown ever since our last month's Memphis Urban Sketchers meeting at Beale. The food trucks of Memphis have formed an association, and they had a "Food Truck Rodeo" recently in Court Square. Elmore met me down there for lunch, some blues, and (for me) a little sketching.

Afterwards, some of the Blues Awards musicians were playing at B.B.King's on Beale, so we walked south to hear some great music at a reasonable time of day. (Harder than it sounds -- much of the music I want to hear is well past my bedtime.) We saw Mary Flower from the northwest play, and I really enjoyed her Travis style guitar picking. Then Eden Brent was up. She's a boogie-woogie piano player from the Delta with an enormous voice and as much energy cracking off of her as any live musician I've ever seen. I love catching her shows when she comes up to Memphis. 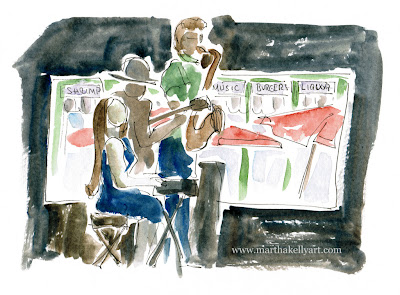 On another recent day, we went back to Court Square to hear Jason Freeman, one of my favorite local musicians. He plays hardcore, old-style blues alone and is also the front man for the Bluff City Backsliders. It was great to take a picnic down and hear some good blues. I love this city. 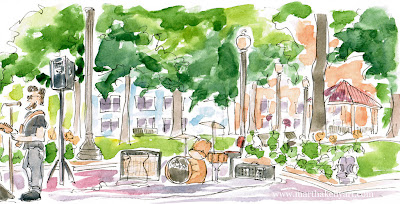 Posted by Martha Kelly at 2:26 PM No comments: 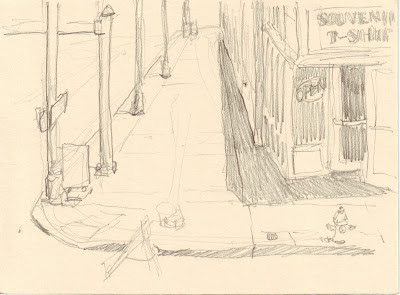 For our last sketch outing we met on Beale Street during the Beale Street Music Festival, which is actually held on Riverside Drive. So it was crowded, but not as crowded as you'd think.
The first sketch is the corner of Beale and 3rd. Though there are no people in my sketch, there were actually tons of people there. I had the perfect view from the upstairs patio of Alfred's for spotting characters, so I could alert the other sketchers: "Look! Old guy in a white suit and hat!"
The next sketch is of the Rum Boogie Cafe, catty-corner from Alfred's, where my cousins Pam and Terry often play music. 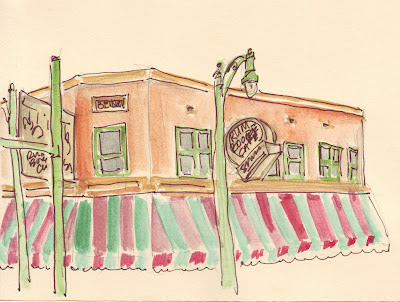 The top sketch is pencil, my trusty 4B, and the second is watercolor with some Sakura Pigma Micron pen on top. Both are on oak tag, a paper I'm trying out because it is similar to the paper in Moleskine sketchbooks, but they are loose sheets. 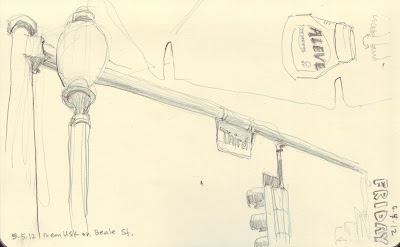 I loved getting a different perspective of a streetlight, being up on Alfred's second-floor patio. So yes, I actually had my feet ten feet off Beale.

Posted by Memphis Urban Sketchers at 11:10 AM No comments: 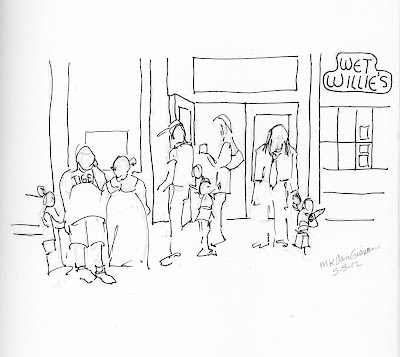 Mary K.VanGieson joined as on Beale Street and made these great pen sketches of Wet Willie's and Dyer's Burgers. 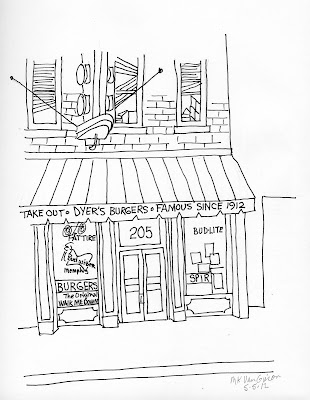 Posted by Memphis Urban Sketchers at 9:42 AM No comments: 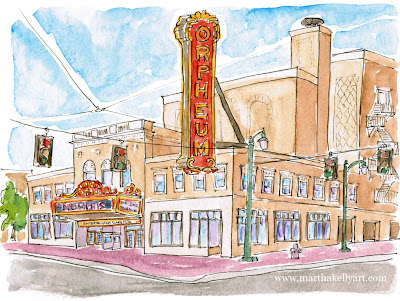 The Memphis Urban Sketchers had our monthly meeting on Beale Street during Memphis in May. I like to go early to the downtown farmers market and get my pick of things, and I wanted to get a parking spot before it got crazy, so I got there almost two hours early and decided to paint the Orpheum. The scene was just around the corner from our meet-up spot, and I'd had a commission request, so it fit in beautifully with the morning.

It was a pretty detailed sketch, though, and it took a lot of concentration, so I only did one more with our sketcher group. A couple of ultra-prepared members of our group had scouted out the scene ahead of time and suggested the balcony of Alfred's, which has a view of the main part of the street and tables with sun umbrellas. Since it was an unusually hot day, the umbrella and wait service bringing cold drinks was a lovely way to work, and I did the below sketch from our table. I love getting to draw and chat with other artists at the same time -- a rare and companionable treat. I look forward to our monthly outings. 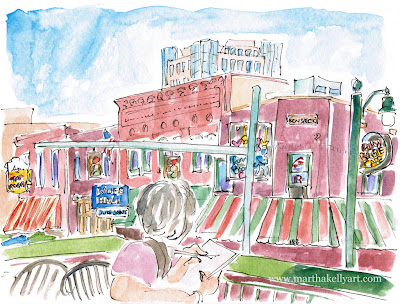 Posted by Martha Kelly at 8:03 AM No comments: