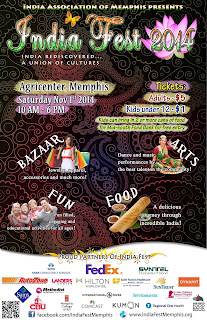 Next sketch group
Saturday, November 1
India Fest 2014
The Agricenter
7777 Walnut Grove Road
10:00 AM
The doors open at 10:00 AM - feel free to get there at that time if you like. We'll claim a table in the large hall where the food is, as a place to touch base, or a place to plant yourself if you aren't ready to get in the mix yet.
Be aware there is an entry fee of $5. Bring cash for food, too - so much good food!!!
Please comment here or on our Facebook page if you plan to attend.
Hoping to see some new faces there this week! See you Saturday!
Posted by Memphis Urban Sketchers at 8:39 AM 1 comment:

Sketches from the Stax Museum of American Soul Music 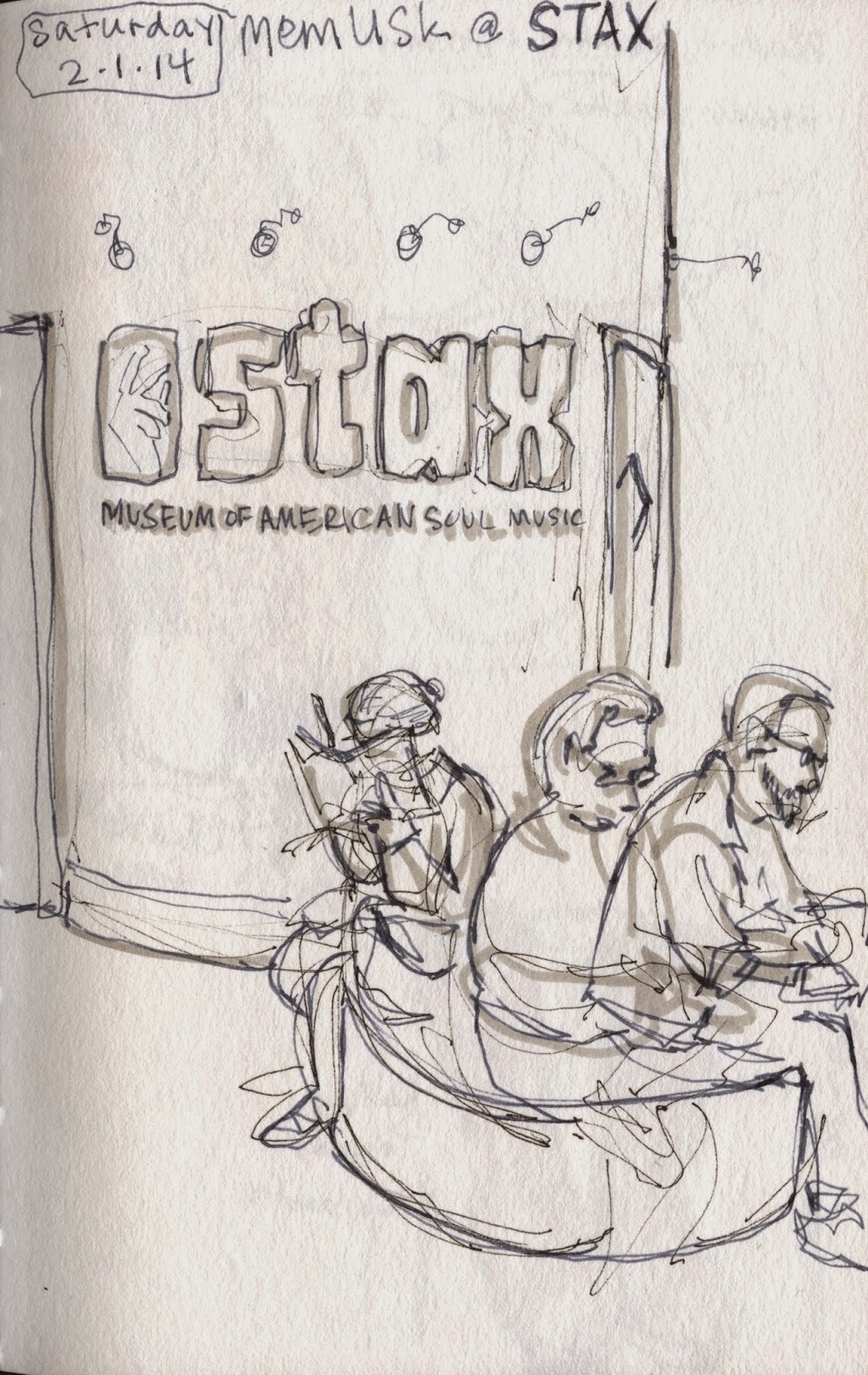 In February the Memphis Urban Sketchers met at the Stax Museum of American Soul Music. What an amazing experience! It is a great museum, and I highly recommend a trip through it whether you are sketching or not. (But why not sketch, right?) 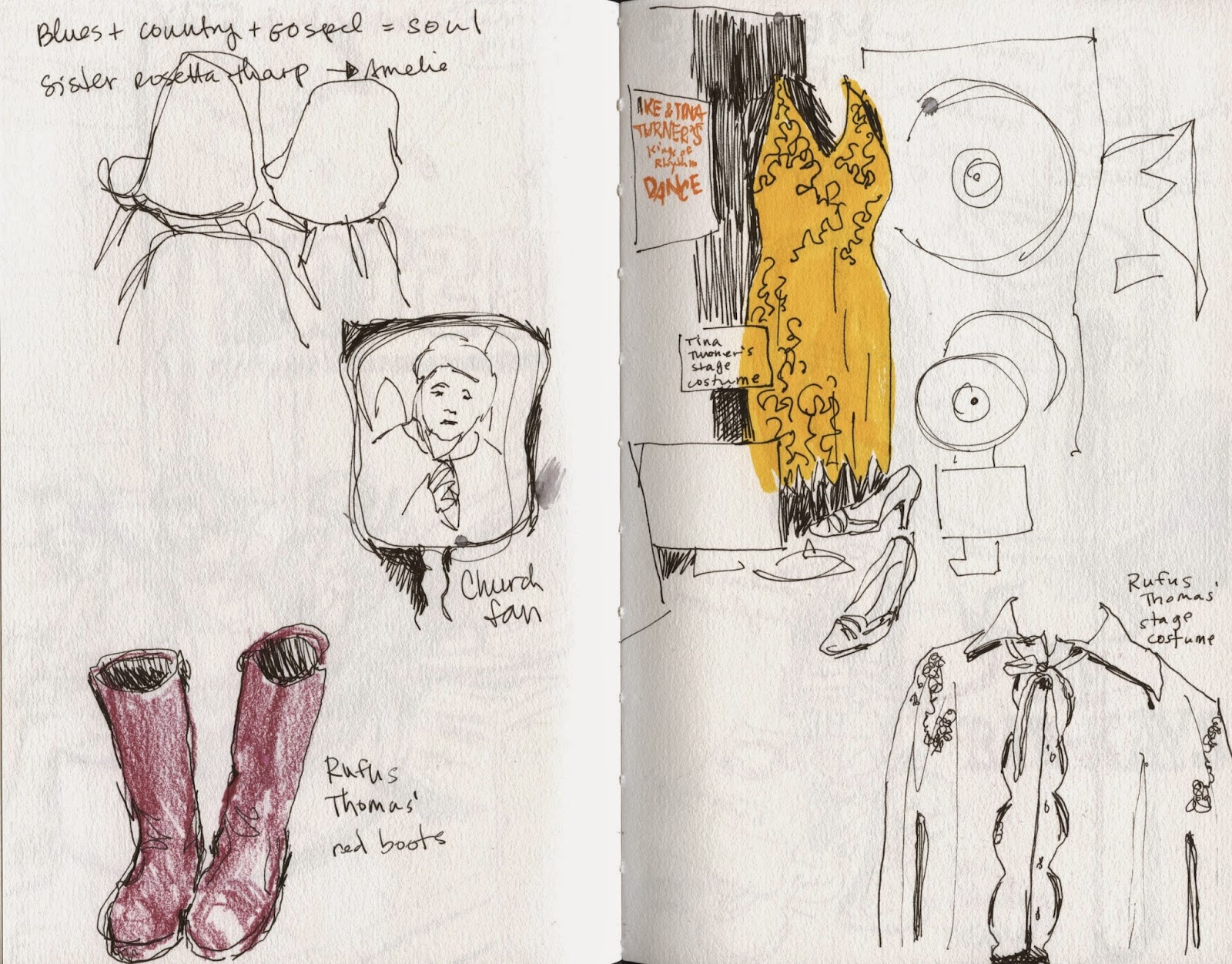 The museum has artifacts from every Stax artist, including clothes, accessories and musical instruments. 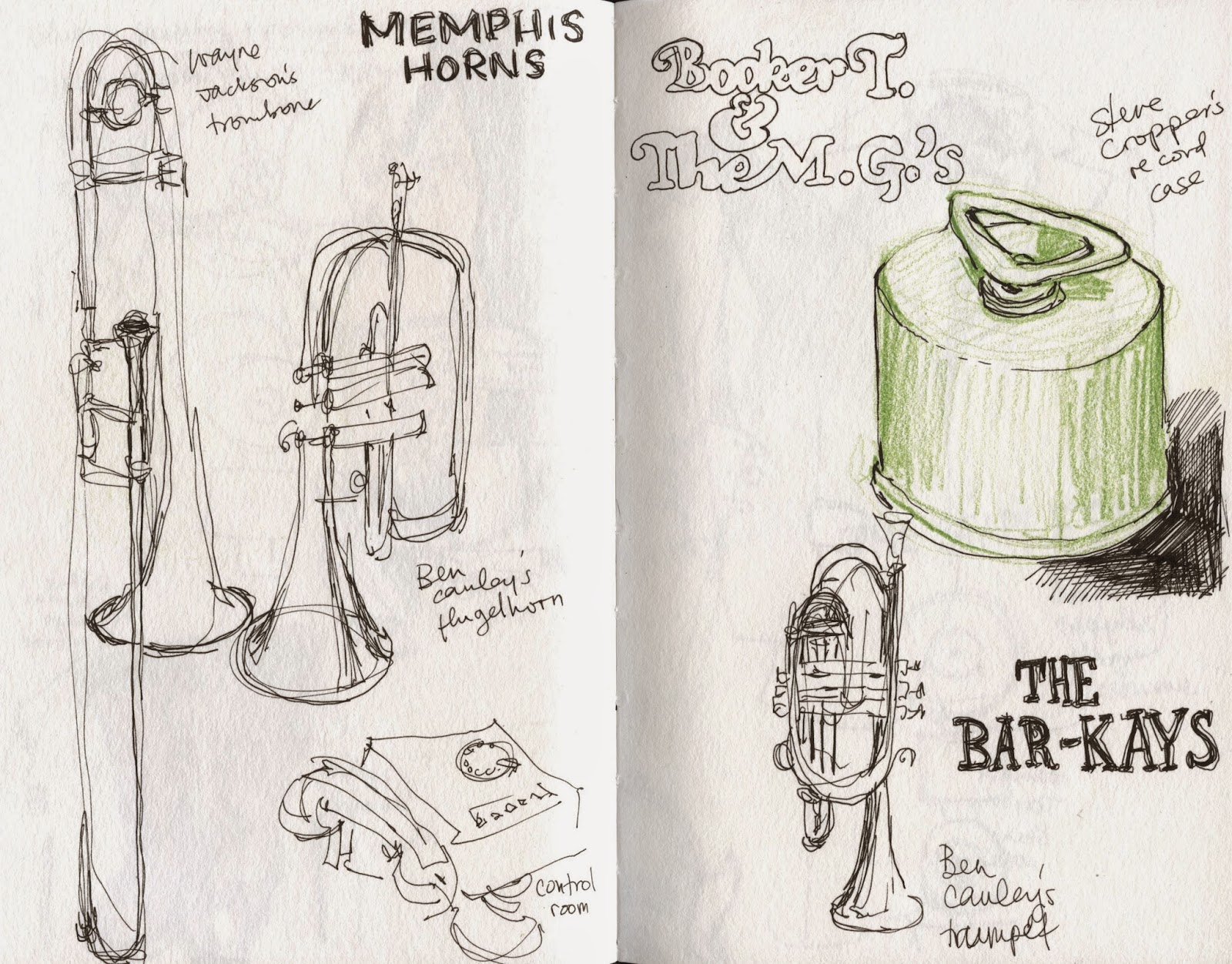 The recording studio and engineer booth was rebuilt to how it looked in the early days of Stax Records. 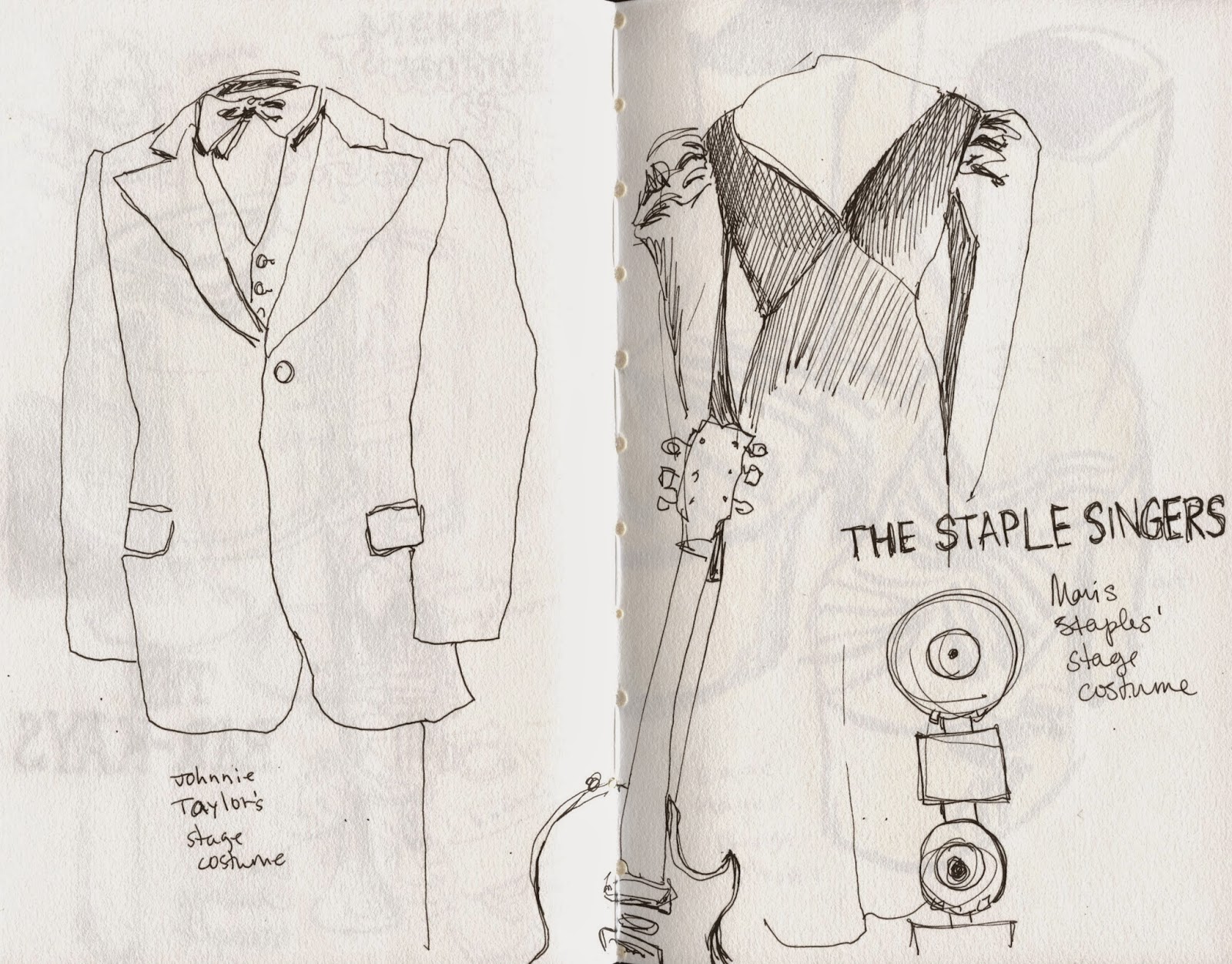 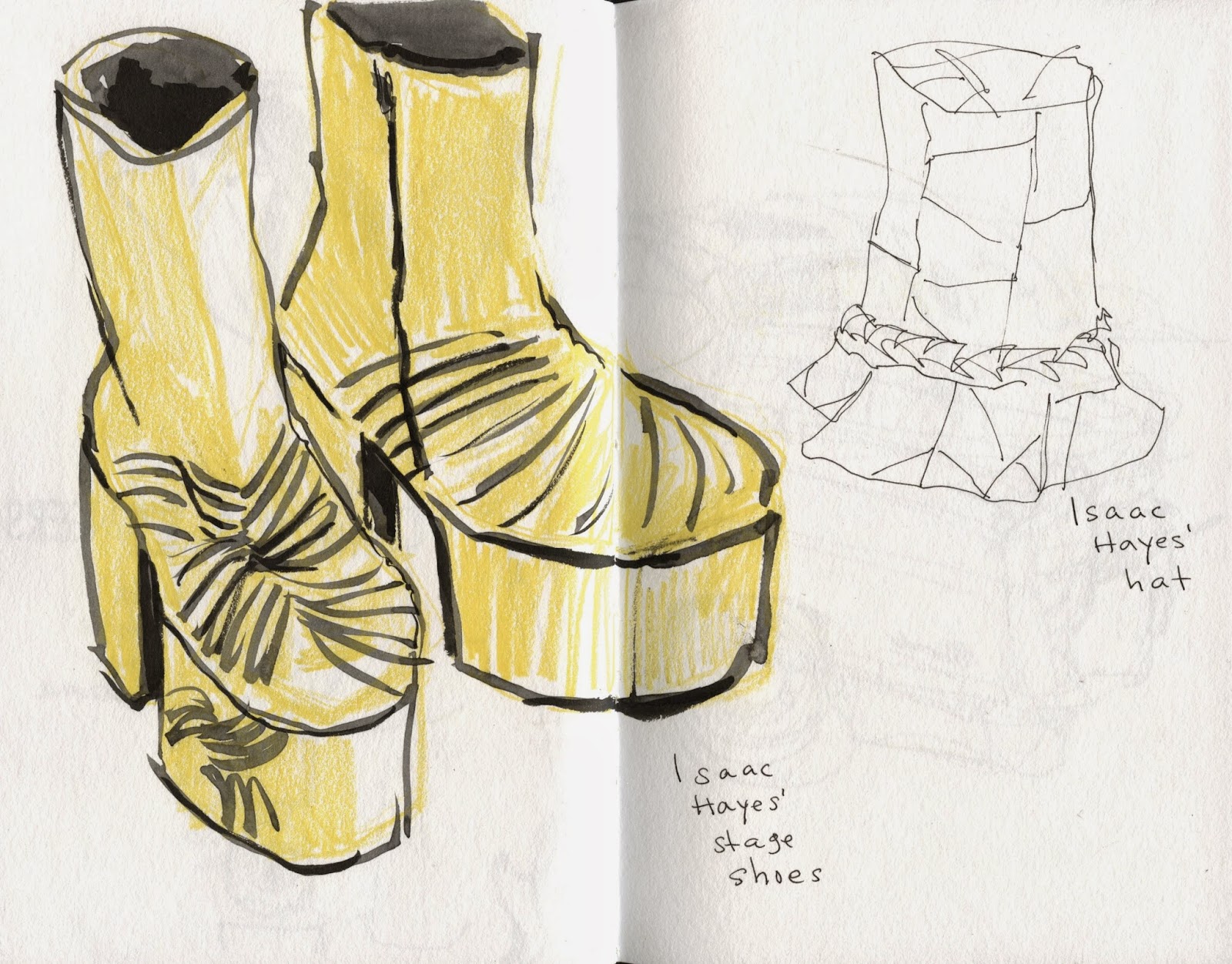 Everything belonging to Isaac Hayes was probably the most interesting to sketch! 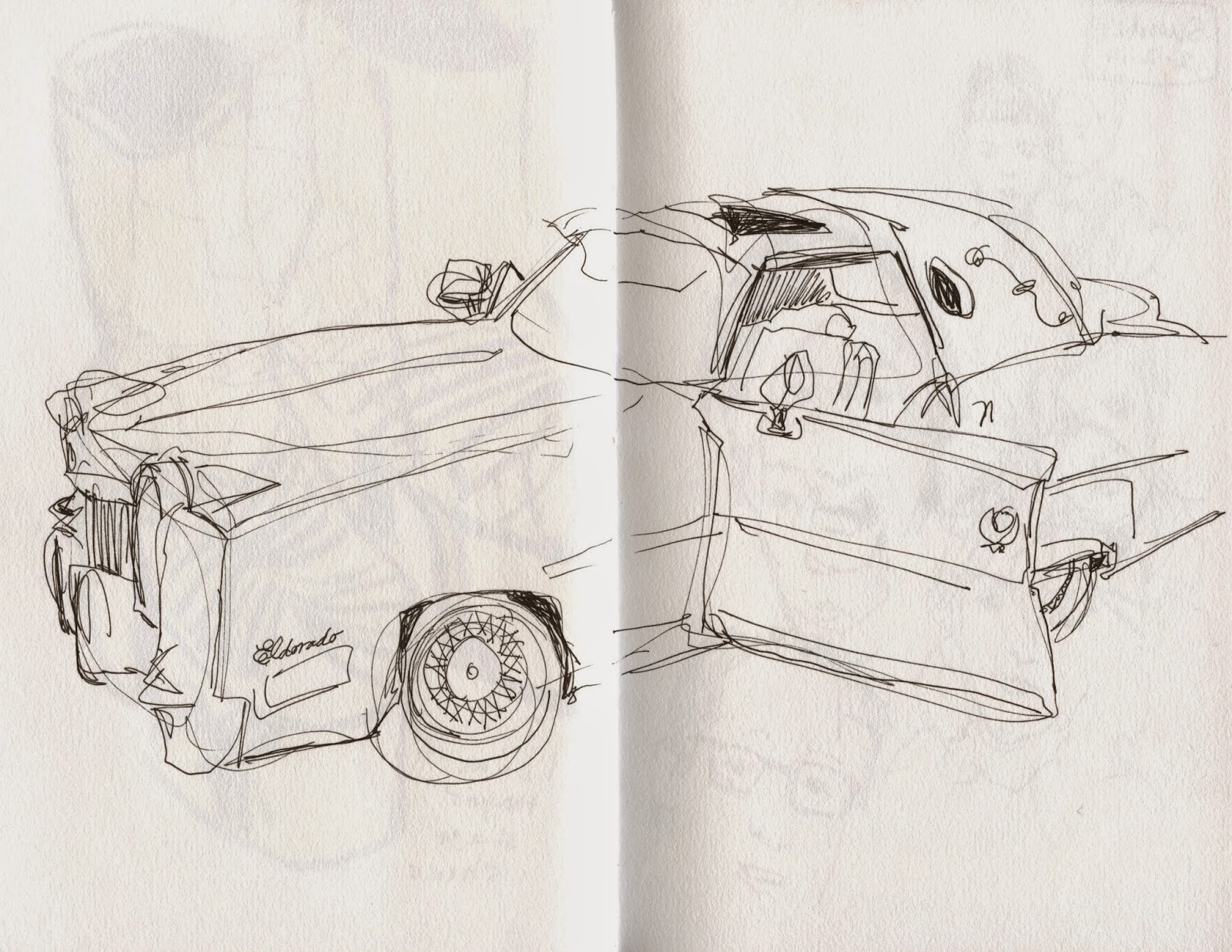 This was the highlight of the day. We asked if they could stop Isaac Hayes's gold Cadillac from spinning on its turntable long enough for us to sketch it. And they did! What a treat! 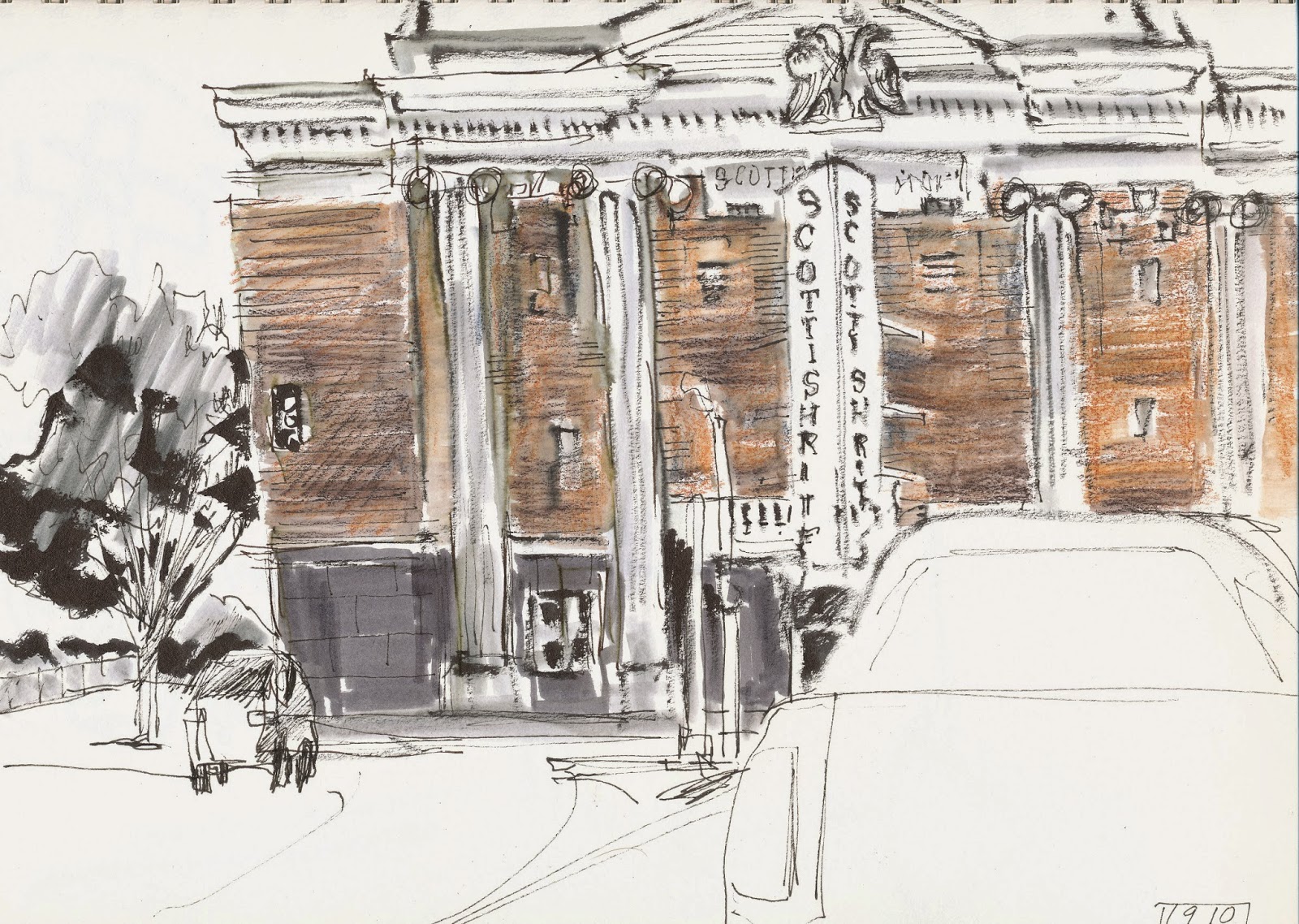 Urban Sketcher Mary K. VanGieson is one of the artists whose work is currently
on display at Scottish Rite Temple, in a great show curated by Jason Miller.  Go to  www.facebook.com/circuitoussuccession/info    for details.  Jason  Miller and I will
both be participating in a one night show featuring the work of 50 local artists this
Friday evening (Oct. 24, 2014) from 6 pm to 11 pm:  The Cigar Box Show,curated by
Fletcher Golden.  (GLITCH Gallery, 2180 Cowden Ave., tel 901-734-6136)
Posted by Unknown at 2:45 PM No comments: 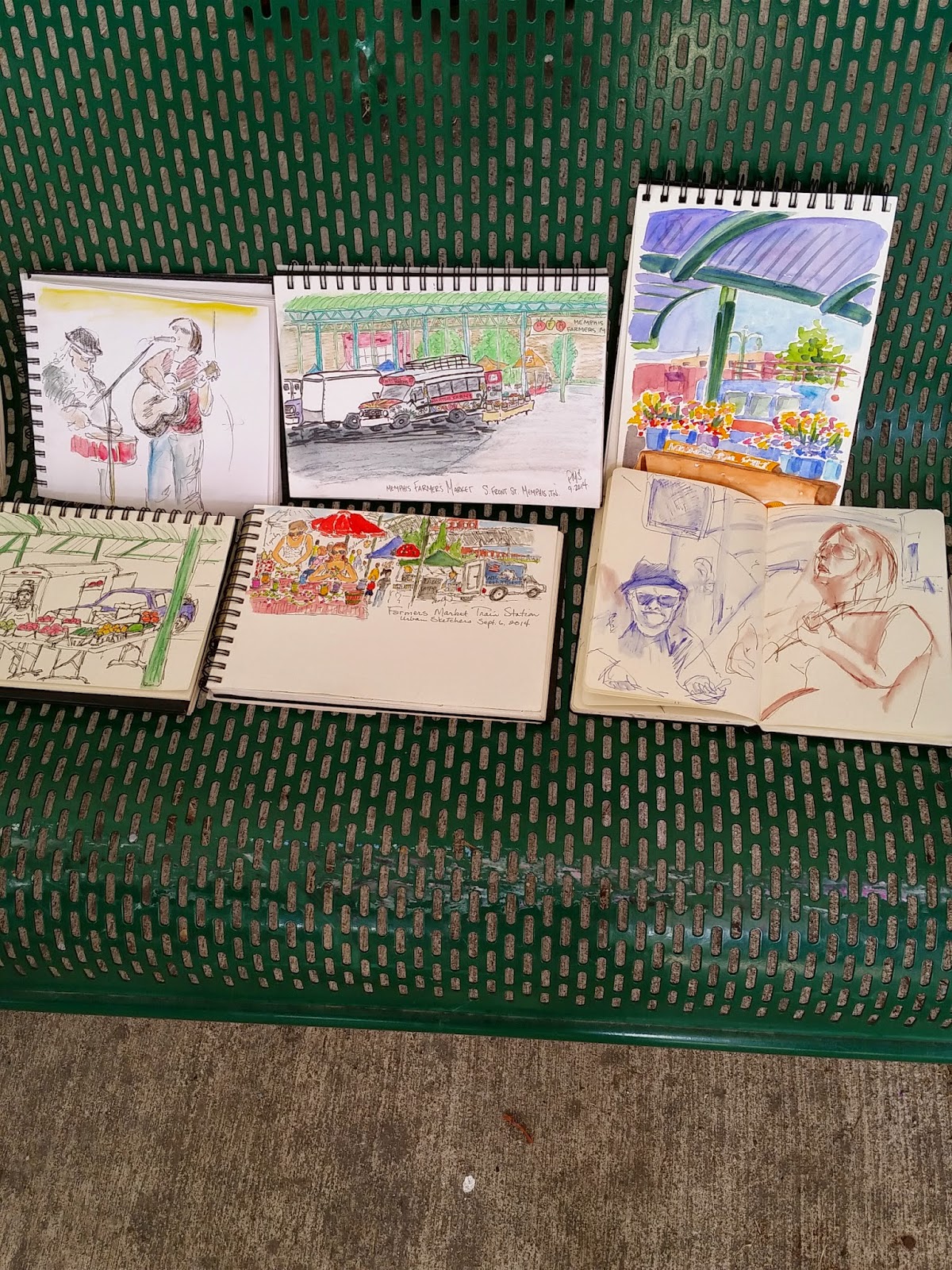 Here are a few shots of everyone's sketchbooks from the September sketch group at the Memphis Farmers Market. It's such a great place to sketch, with its mix of people, architecture, activity, and colorful fruit and vegetables and flowers. 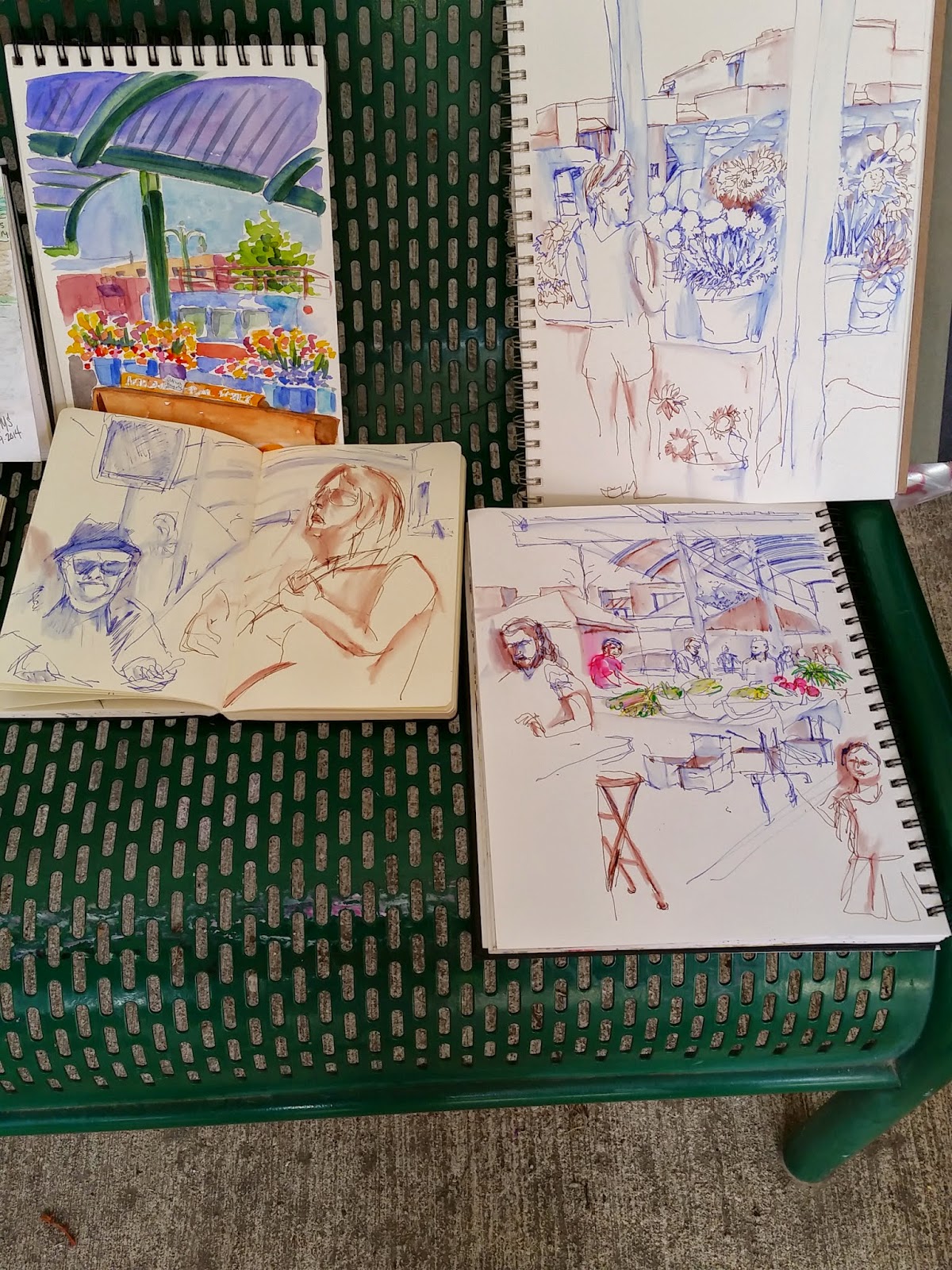 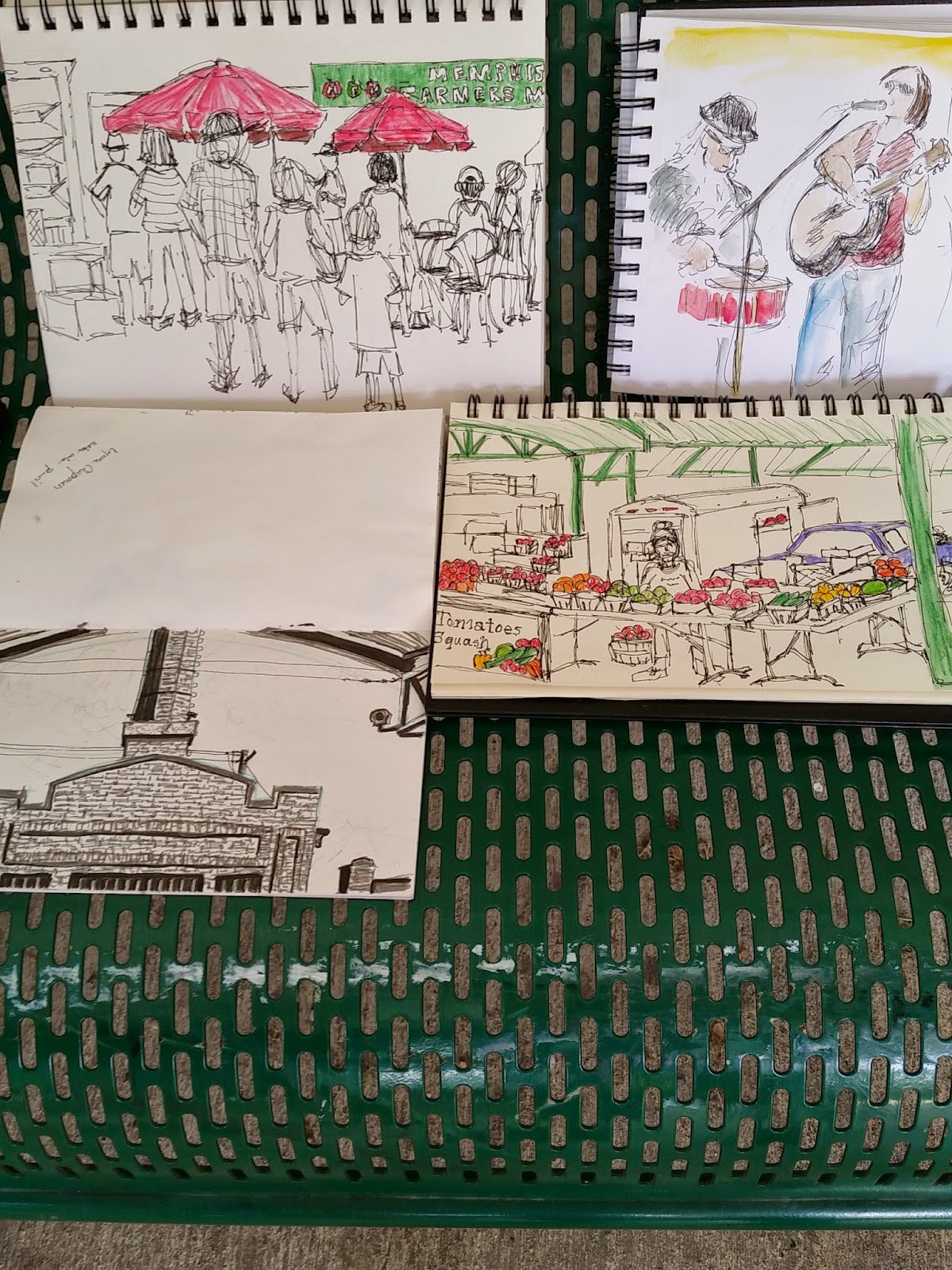 Posted by Memphis Urban Sketchers at 11:12 AM No comments:

Drawing at the National Gallery in London

While visiting England in May of 2013, I had a chance to visit the National Gallery. I went with a sketchbook and Dewent watersoluble ink pencils. Instead of trying to look at every painting, I spent my time sketching a few and seeing more. I used a water brush occasionally and no one seemed to mind. 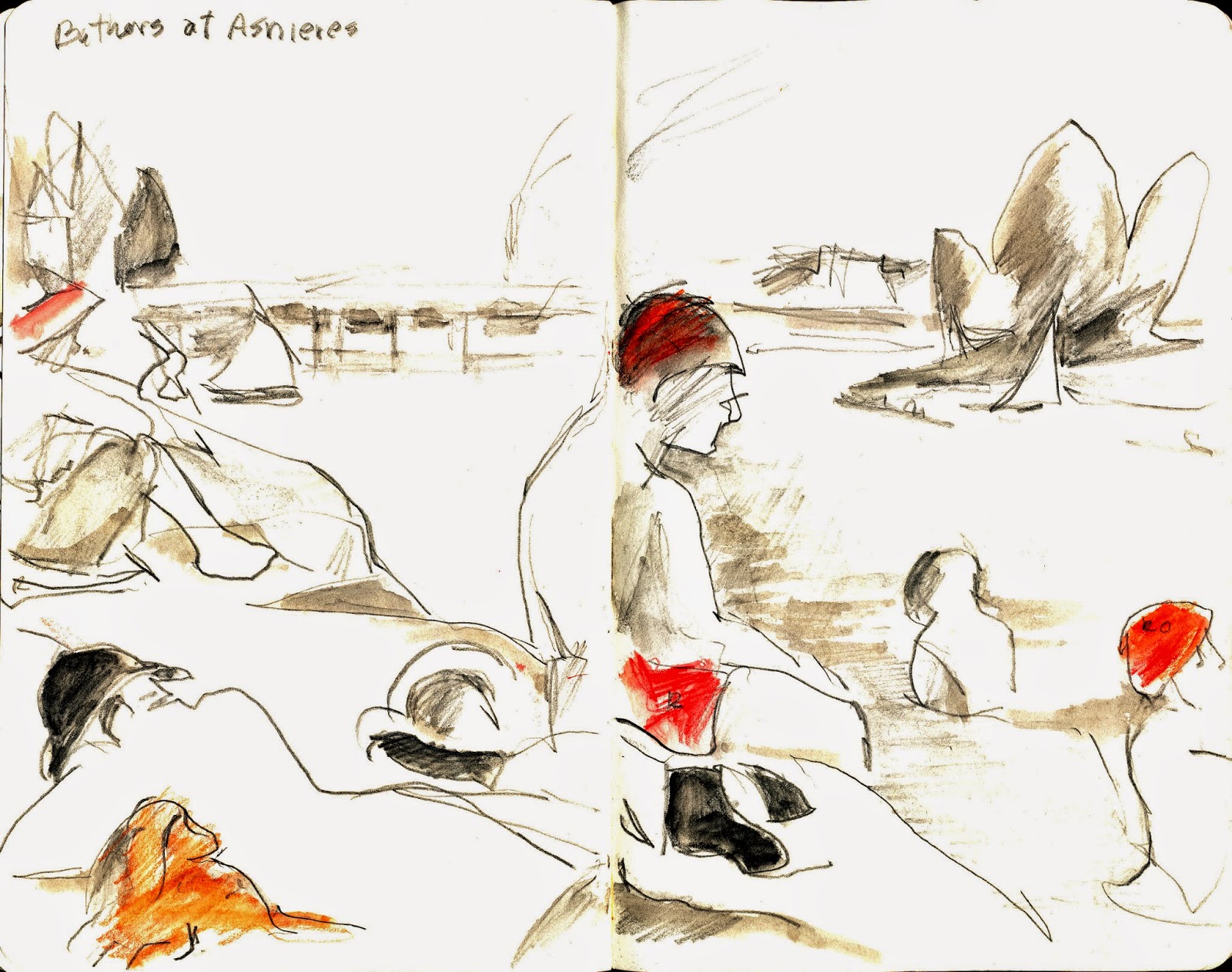 Seurat's  "Bathers at Asnieres" is very calm with lots of blue and touches of orange that glow, I located most of the oranges in my sketch. 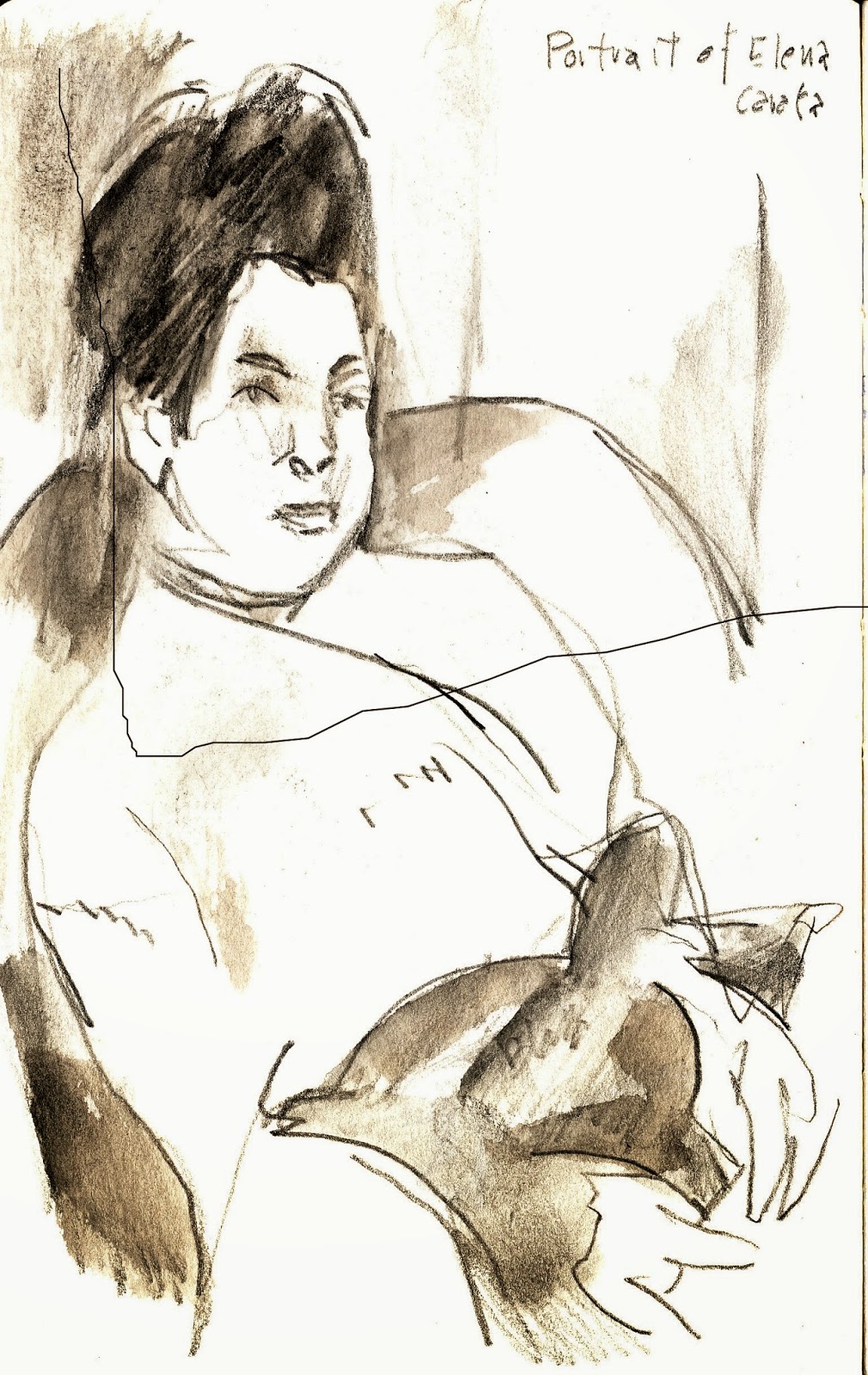 Degas' "Portrait of Elena Carafa" looks much younger than my sketch, less jowls. 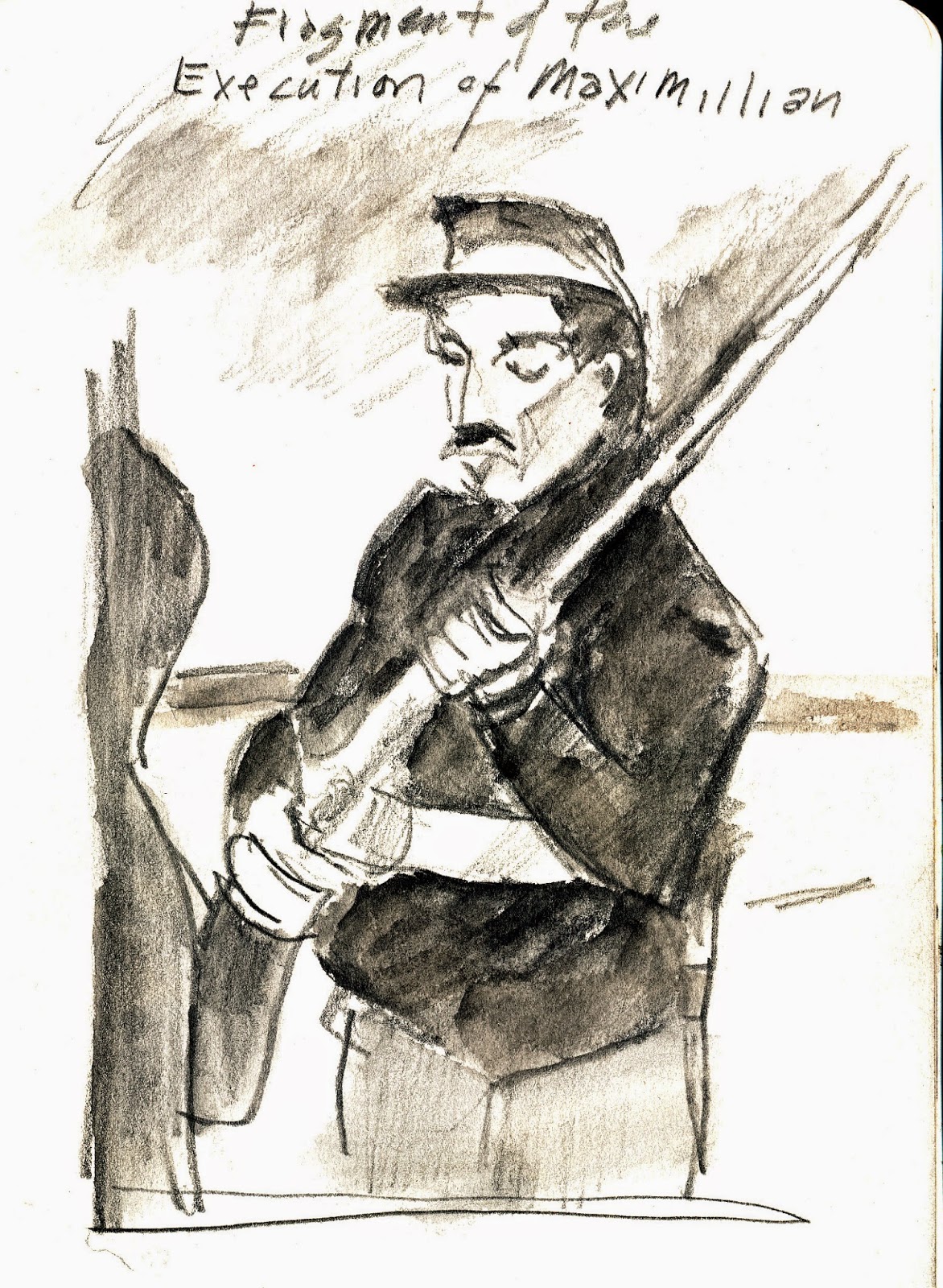 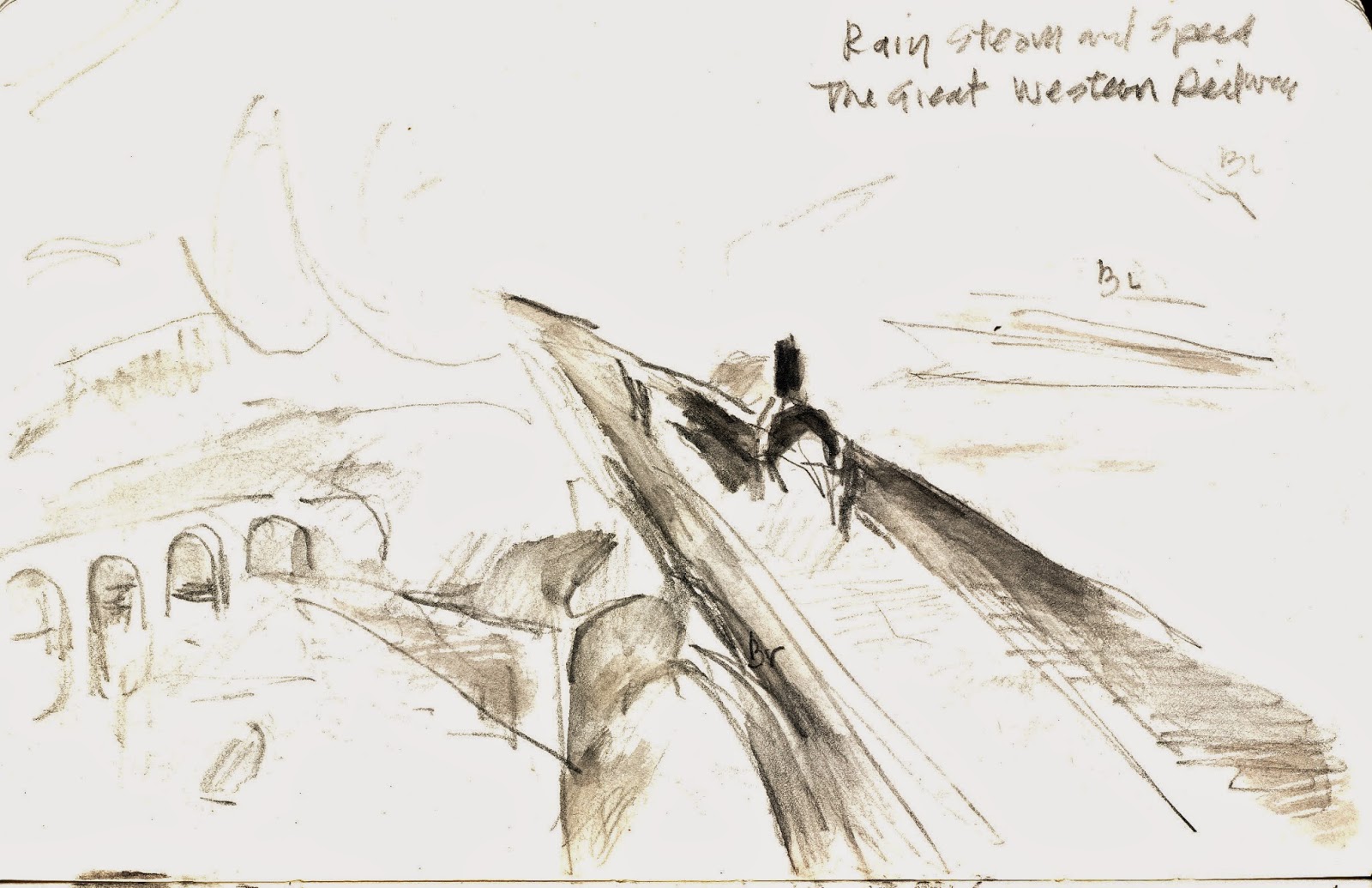 Only when I started drawing did I notice the bridge and small boat in Turner's train painting.  I read later that there's a rabbit in this painting, but I didn't see it. 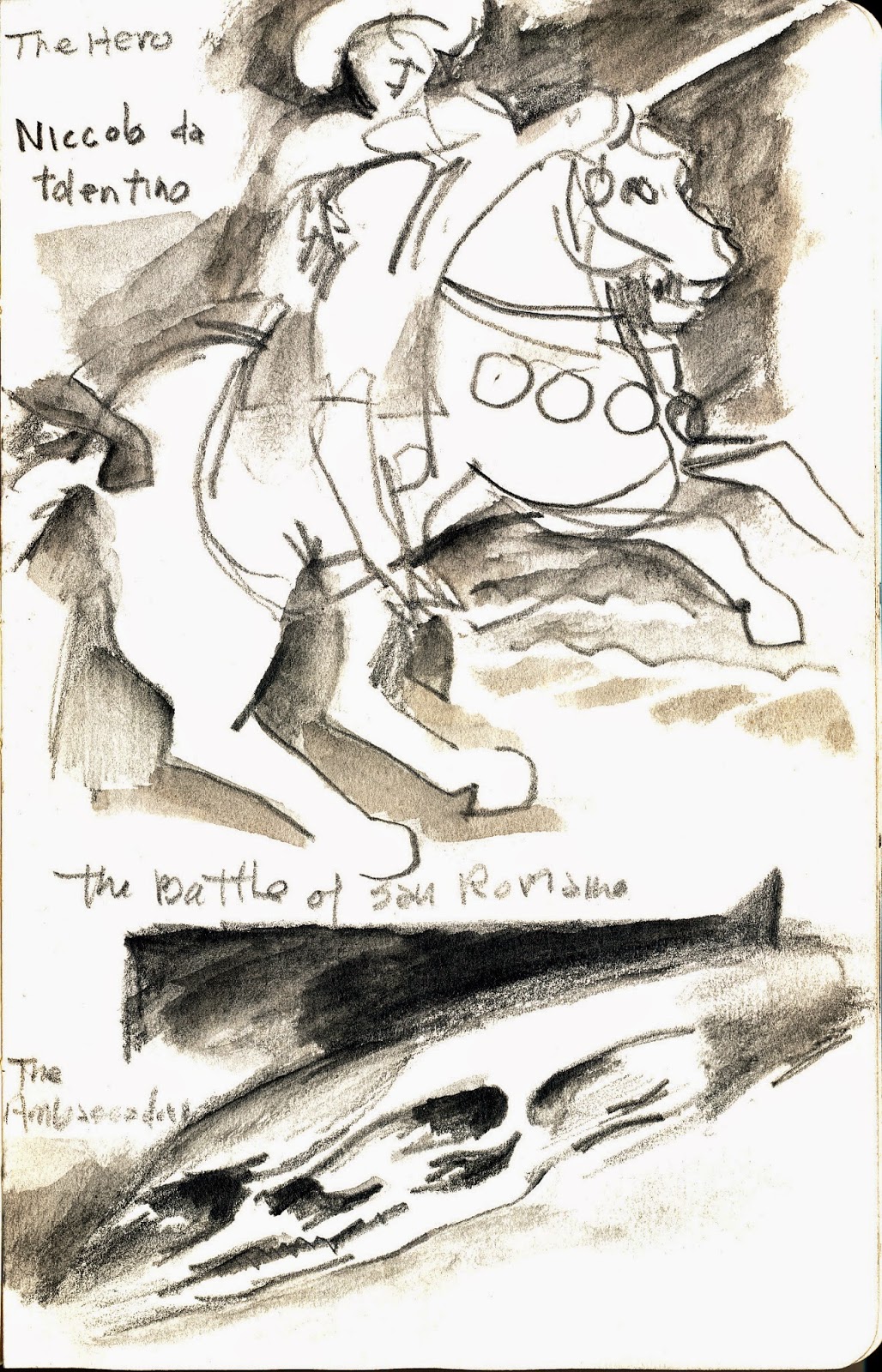 Uccello's horses look like they could have galloped in from a Disney cartoon.


I stood to the side so I could better see the skull in Holbein's "The Ambassadors." 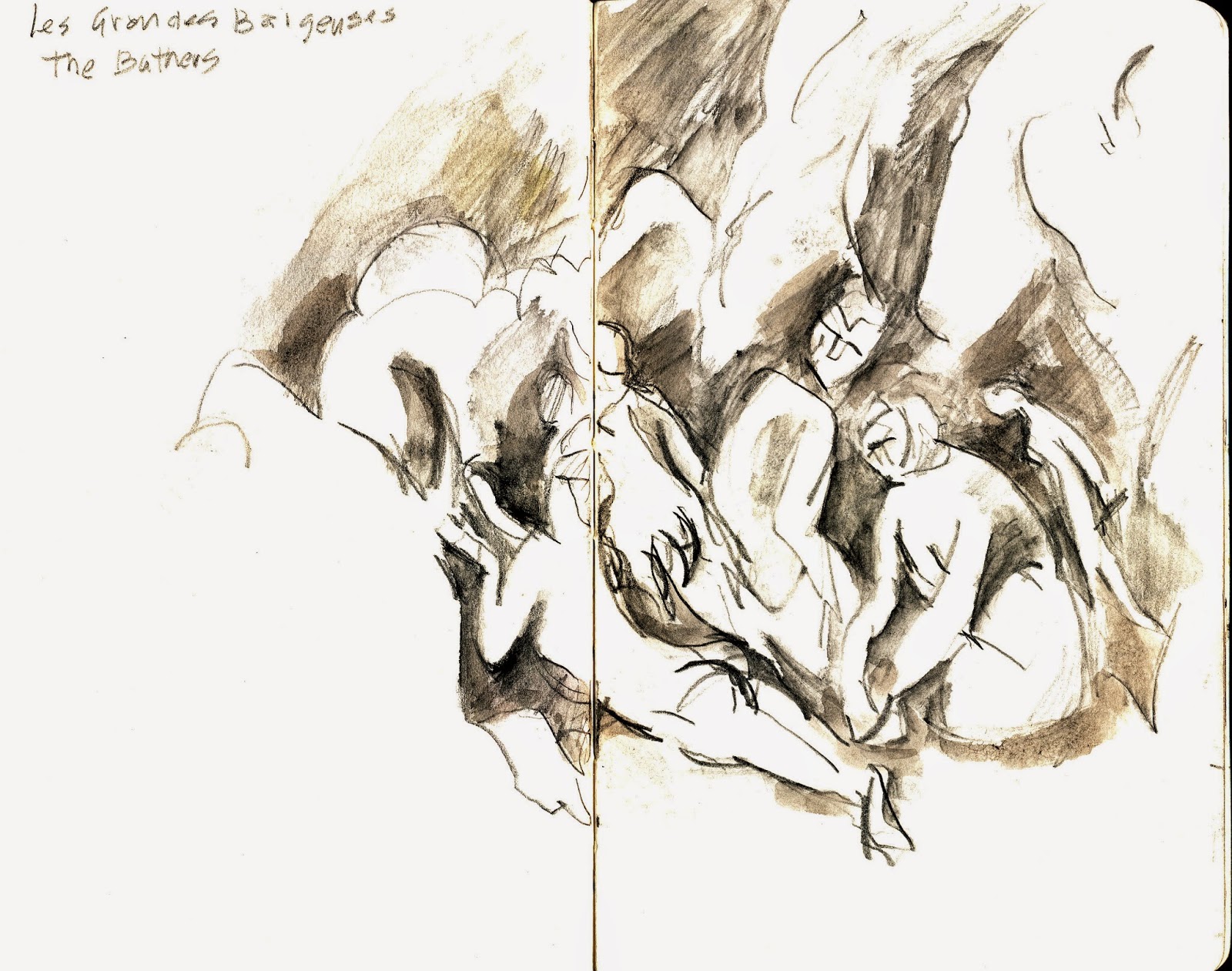 The right side of Cezanne's bathers attracted my attention, especially the figure on the far right. Why was she so thin?
Posted by Unknown at 2:14 PM No comments: 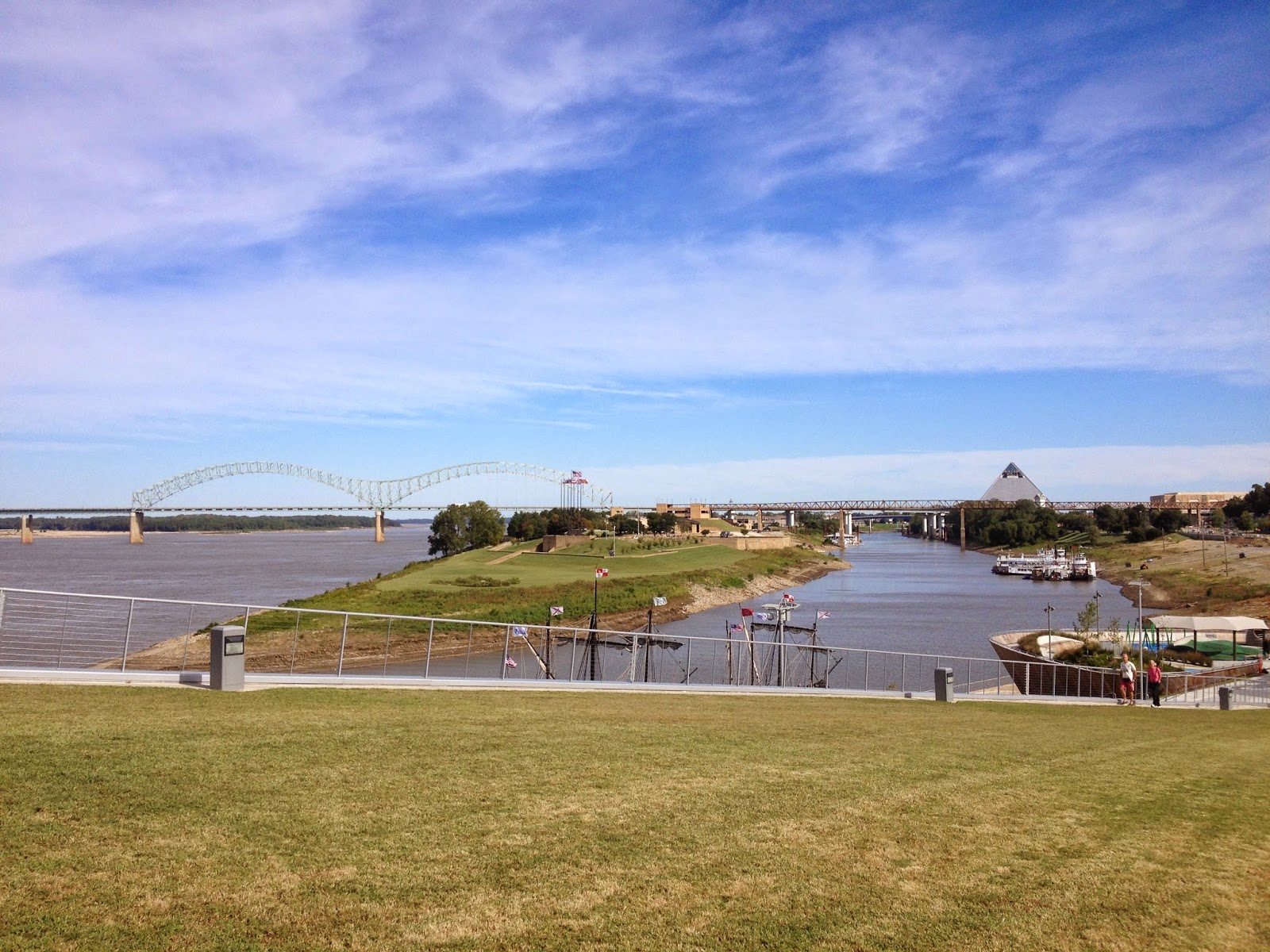 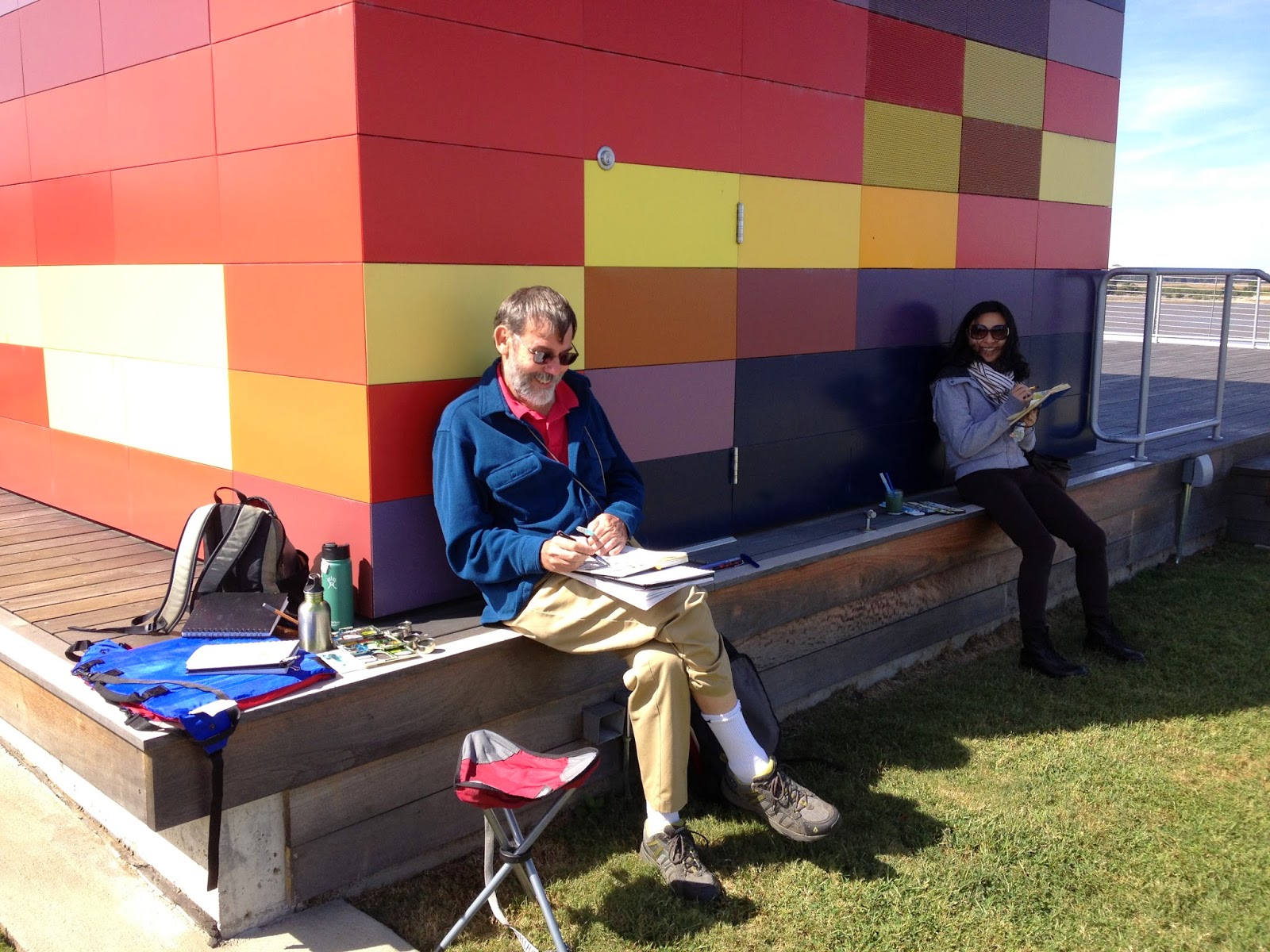 The Memphis Urban Sketchers met downtown at Beale Street Landing last Saturday. It's a new park, overlooking the Mississippi River, with lots of different possibilities for sketching. Here's what we got: 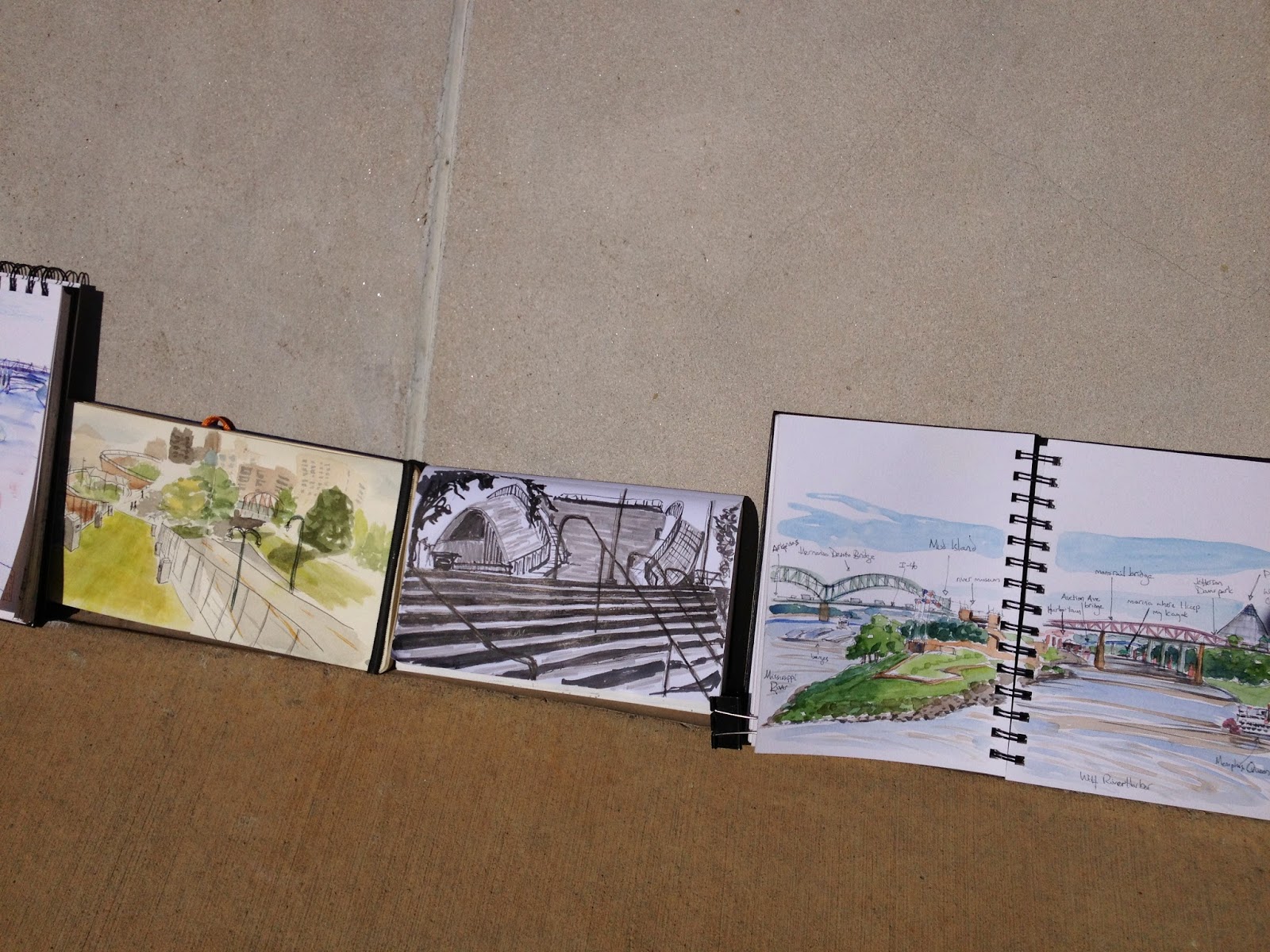 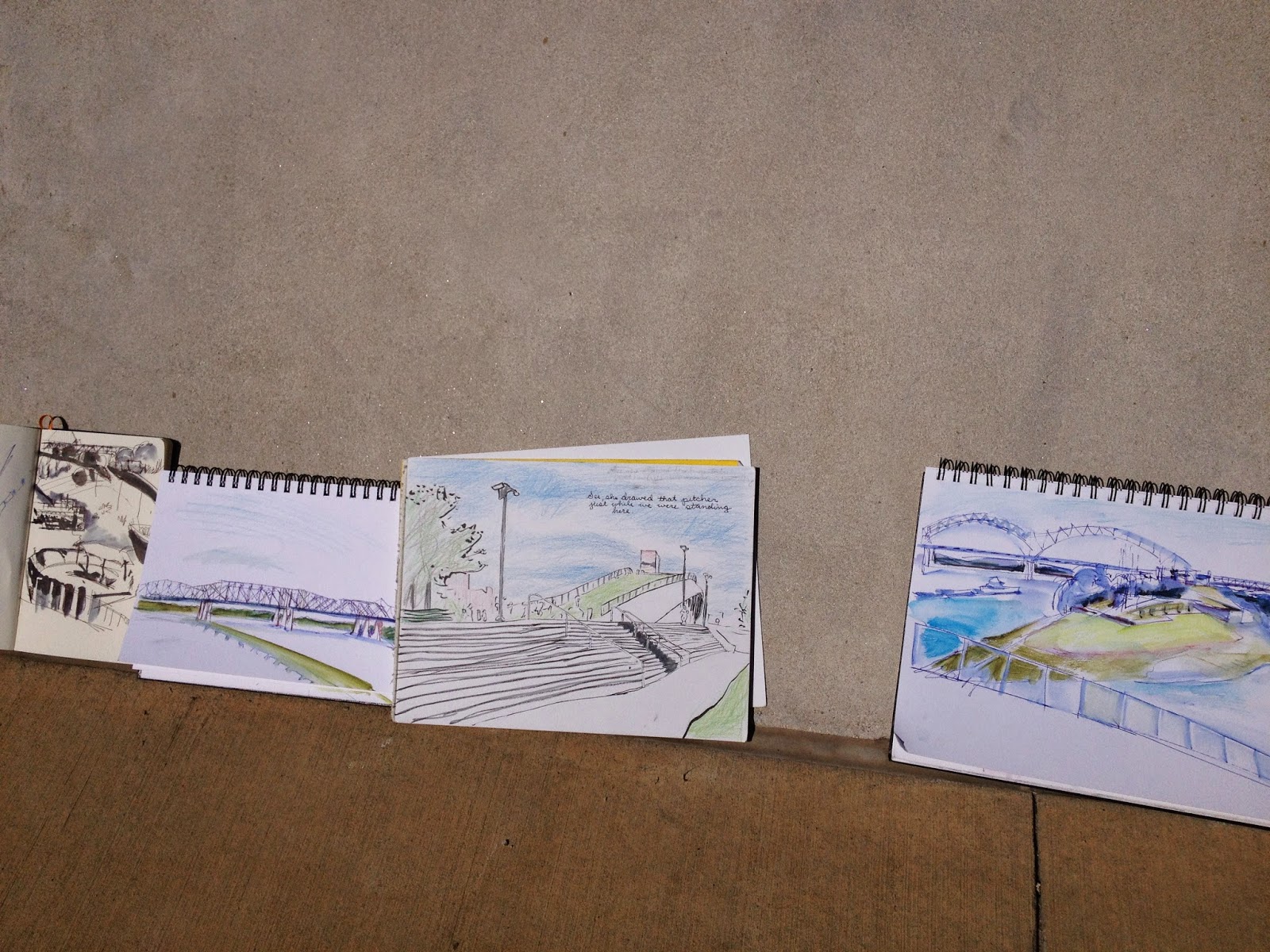 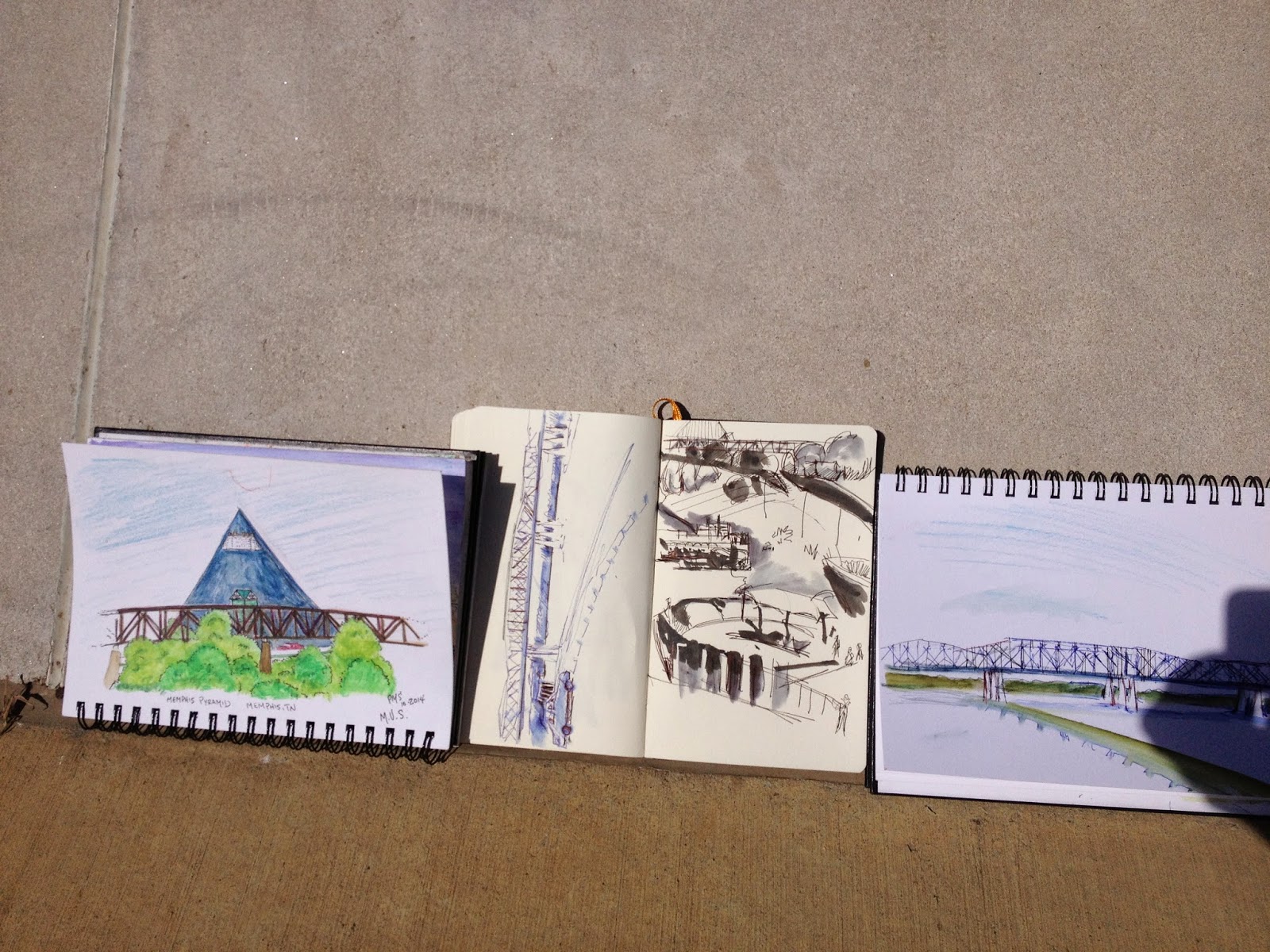 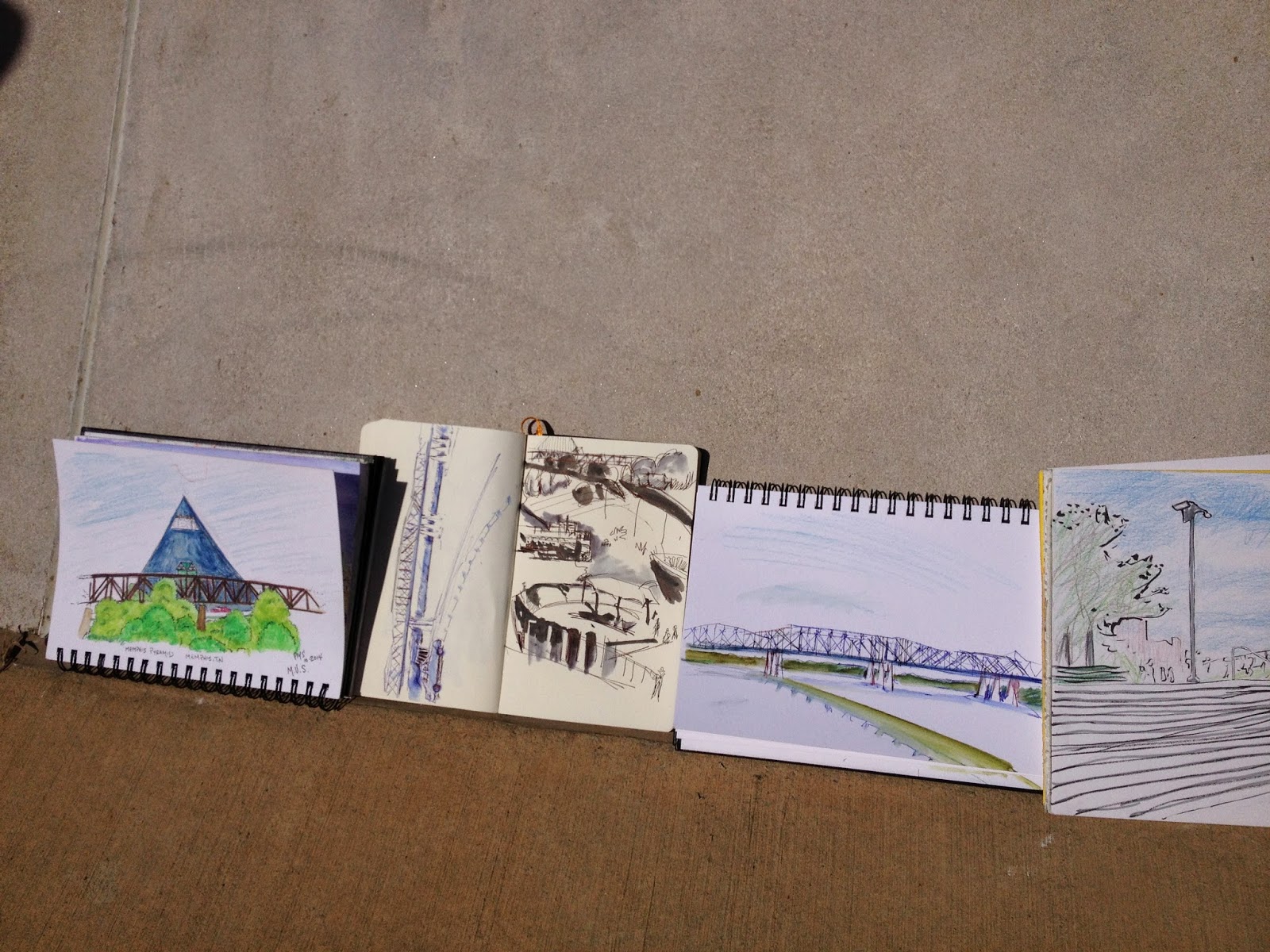 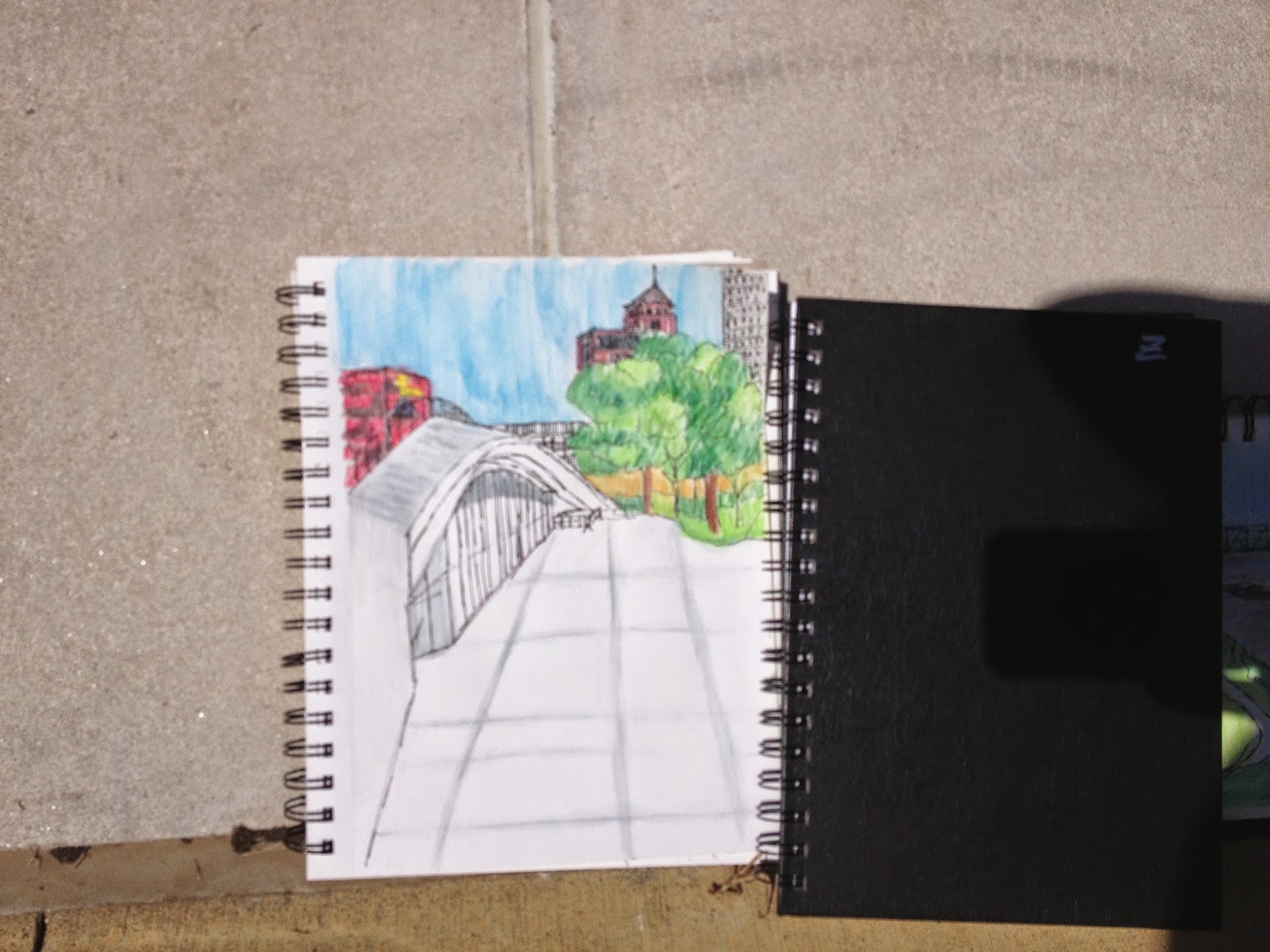 I scanned mine in when I got home. 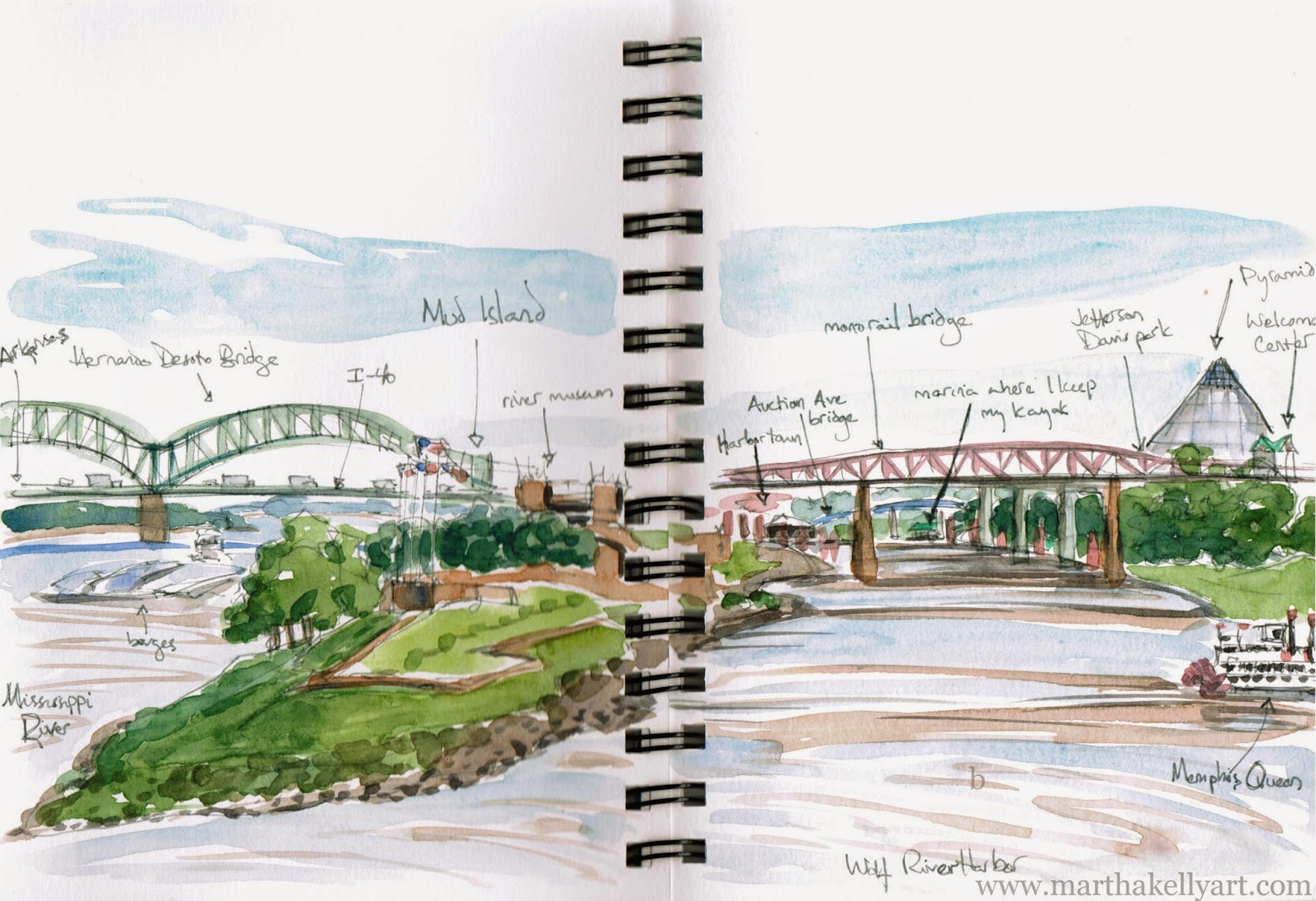 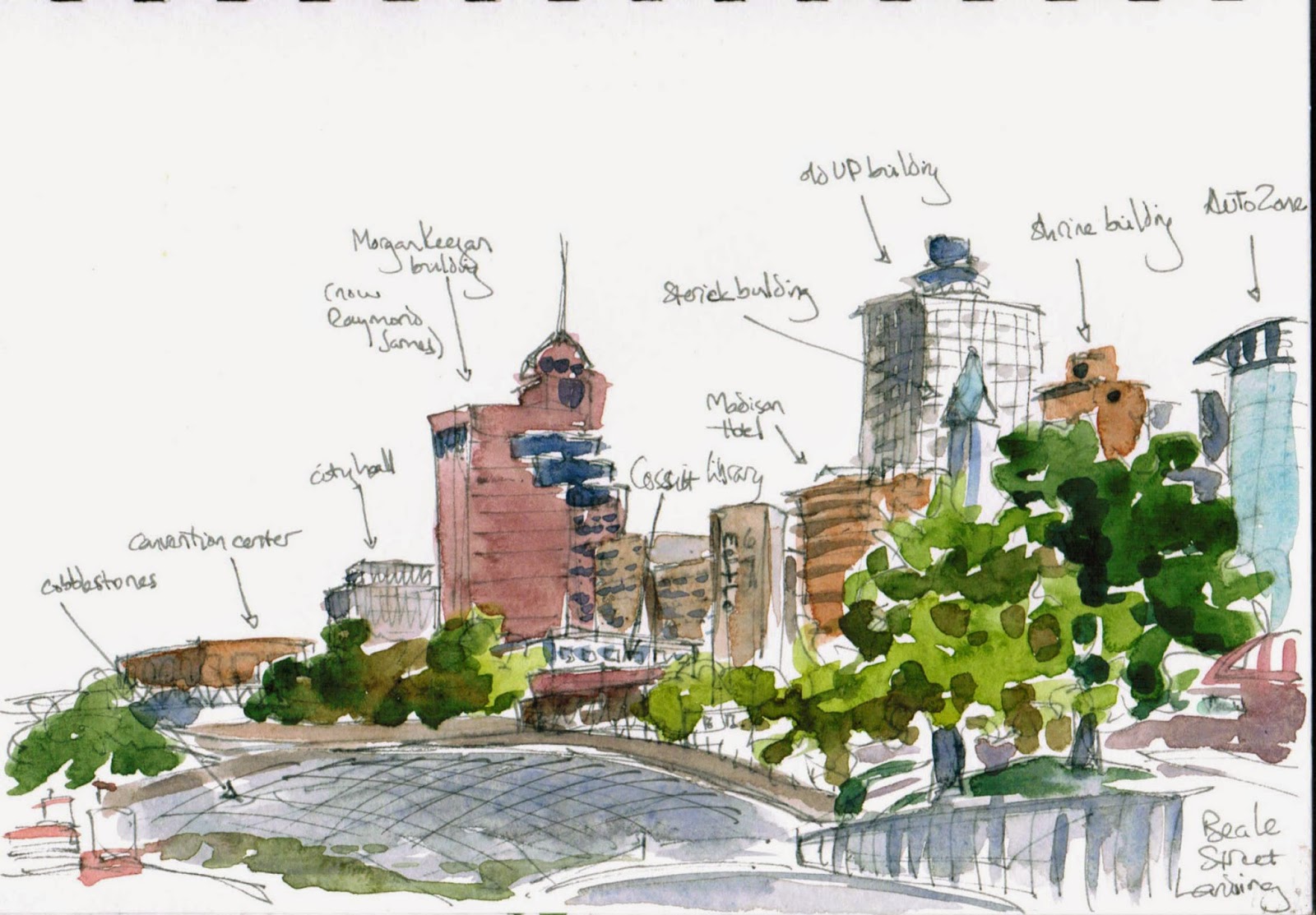